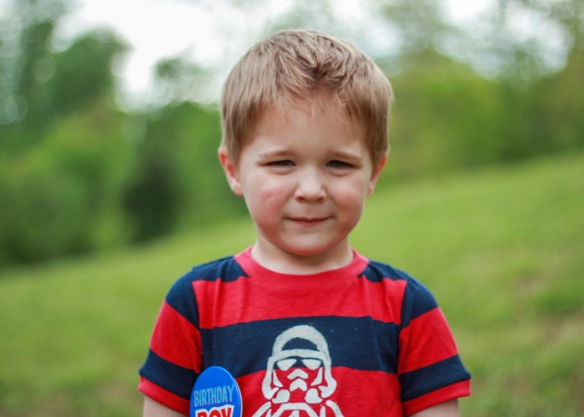 Oliver turned 4 today….sigh. On the one hand, it feels like I’ve been a mom forever, but on the other hand, it feels like just yesterday he was a teeny little baby. Four is just such a big kid age! And while I really am excited to get to enjoy all the fun that comes with the big kid stage, I’m mourning just a bit the loss of my little toddler. Okay, enough sentimentality, on to some crazy cute pictures of this kid. Can you tell Daddy was around to take pictures today? Yeah, maybe one day I’ll have his photog skills.

The birthday shirt is a tradition around here. And like all good traditions, it’s always made the night before the birth day itself. 😉 In the past, I’ve done mostly traditional number shirts. You can see my previous ones here (three, two, one), but this year I wanted to do something different. Something that would mesh into his every day wardrobe a little easier. So I consulted Oliver, of course. He picked out this navy and red striped knit from my stash for the fabric. (bought on a recent trip to Charleston where I stopped in at Five-Eigths Seams and raided their knit stash. Unknown substrate info except it’s a lightweight jersey knit that feels like mostly cotton with maybe a little bit of spandex).

I searched the internets for birthday number tee ideas until I came up with several options for O to choose from. He, of course, wanted all the options so we decided to combine the superhero shirt with the stormtrooper. I used a free stormtrooper printable (found here) and added Superman’s logo to the chest along with the 4. It might not be super obvious that it is a Superman logo, but Oliver gets a kick out it so that’s what counts.

The stormtrooper is freezer paper stenciled onto the shirt. Cutting out all those pieces was a bit tedious but I really like the end result. Note on freezer paper stenciling: less is more. I put my paint on a little too thick and the stencil didn’t come off very neatly, so I had to go back with a small brush and touch up a bunch of spots. Ended up being fixable but wouldn’t have been an issue if I had used thinner layers to begin with.

Pattern is the flashback tee in a modified size 4. I wanted it to be a little looser fit so I added about 1/4″ to the width on both sides when I was cutting it out. I wasn’t thinking and cut off some of the bottom hem to even out the stripes and ended up cutting off too much and making it too short. So I used the same rib knit that I bound the neckline and armholes with and made a binding for the bottom hem. It’s not my fave hem but at least it’s not too short! I must admit to being pretty happy with how well the stripes matched up on the sides and the sleeves!

The entire shirt was sewn with my serger so it was a pretty quick sew- made up for the time-consuming stencil. And that wraps up a pretty successful Kid’s Clothes Week. I don’t always get to whole heartedly participate anymore, but I really enjoyed getting into my sewing groove this week and cranking out a bunch of stuff. I’ve got a few more things to show you next week after I put the finishing touches on them.