My husband’s sister got married this past weekend and had asked if Oliver would be a ring bearer for her wedding. With great trepidation we agreed to try to see if we could coerce him into it. 🙂 Originally I was going to try to make him a tweed jacket to wear but happened to find the perfect jacket on sale at Old Navy and decided to go with that option. However my sister-in-law asked if I would make bow ties for both Oliver and the other little ring bearer. Of course I left this to do until the day we were leaving to travel to the wedding so, thankfully, it’s a quick and easy project. I used this tutorial from Delia Creates as a starting point. Instead of doing elastic in the back, I sewed velcro onto the bow tie so that we could leave them tied and remove using the velcro. Who wants to have to tie those things over and over again?! 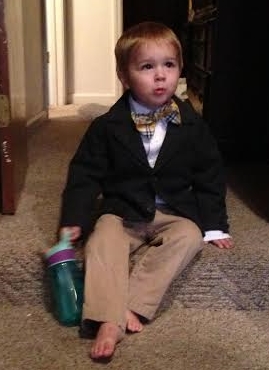 Funny story, as I’m sitting there the night before the wedding using Delia’s picture tutorial to attempt to tie the bow tie correctly, I try to see if any of the 5 or so guys in the room could tie it for me. Nope, they were all clueless, so it was left to the woman to figure it out. 😉

I liked little E’s bow tie even better than Oliver’s but unfortunately his hand blocked half of the bow tie in the one shot I got of him.

My one advice is to make the tie part extra long because I made the other little boy’s too short and had to add some extra fabric to it at the last minute. Thankfully that part of the bow tie is hidden under the collar so you can’t see my wonky fix.

I really wanted to get some cute pics of the boys wearing their bowties and spiffy outfits (really everyone stopped us to tell us how cute they were) but the wedding took place during nap time and it was all we could do to get the boys to walk down the aisle. No picture taking for them! So you are stuck with a few fuzzy iphone pics and an Instagram shot. Oh well, now I have a cute bowtie for Oliver to wear for special occasions and maybe I’ll get some good pictures another time. Fingers crossed we’ll get use out of this outfits for our Christmas card photo shoot! Are we crazy to even try to good pictures with an infant and 2 year old? 🙂 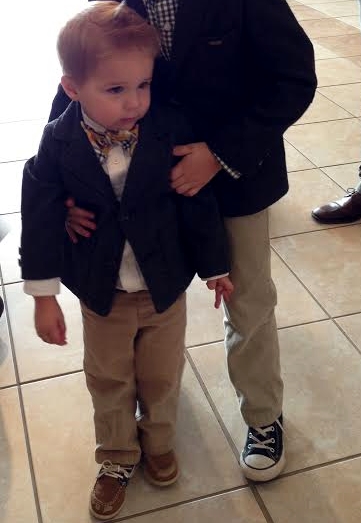