I am SO PROUD of this shirt! I cannot believe I actually sewed a men’s button-down shirt and it hasn’t fallen apart yet! Several years ago I promised my hubs I would make him a button down shirt after seeing Rae’s version of the Negroni for her husband. But it wasn’t the top project on my list and kept getting bumped for other things. Every now and then, he would remind me about my promise, and I would make note of it and then completely forget about it. July 18th was our 5 year anniversary, and I really wanted to do something special for Ian since he has been such a huge help during and after this difficult pregnancy. I am well known for deciding such big things right before the occasion comes up and then never finishing said project. But this time I determined it would be different! And it was; I actually had a semi-finished shirt for Ian to try on for our anniversary day. The best thing was that this shirt was a complete surprise for him! 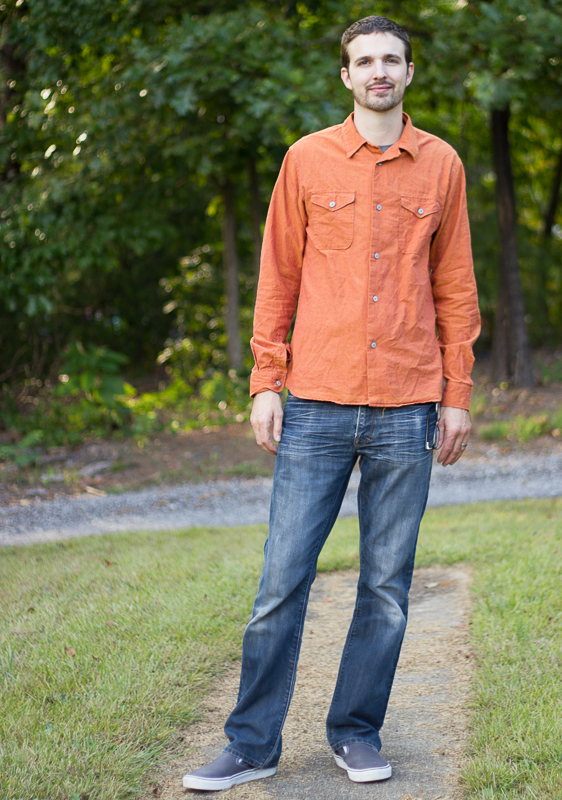 Pattern: Negroni by Colette Patterns. 2 thumbs up for the pattern! The shirt came together so much easier than I had anticipated. Only hard part were the cuffs which I had to redo several times because I made some mistakes and didn’t understand directions. Also I put one of the cuff plackets on the wrong side so one placket is facing the inside of the sleeve and the other faces the outside but no one notices this so it’s not a big deal.

Material used: a shot cotton I picked up at a fabric sale for super cheap a while back. This was my “wearable muslin.” This fabric works great for the pattern and I’m already planning on making another one in a dark green shot cotton. However, I must tell you, just like my Ruby Top, I ironed the shirt before our photo shoot and it’s still wrinkled. Ian doesn’t mind the wrinkled look, but if your husband is picky about that you may want to consider using a different fabric.

Other notes: I used one of Ian’s dress shirts as a size guide, and he happens to be a perfect medium! The shirt fit great with no needed alterations. Next time I think I will try to install a traditional collar rather than the camp style collar but every thing else I will keep the same. I found some tutorials on the traditional collar insertion so I will read up on those before I attempt it.

Legoland! Also known as how many ninjago people can Eliot take pictures with. 😂. We loved legoland. It was not crowded, we got really inexpensive homeschool day tickets, and the weather was gorgeous. Unfortunately I woke up with the boys’ bug so I wasn’t feeling great but thankfully all of the boys felt great and had a great time. Legoland doesn’t have the finesse of going to Disney, but they do a great job with all the fun Lego structures and rides and it’s a nice change of pace to leisurely walk around the park rather than race from ride to ride. Did I mention no crowds? LOL. Both our park days were fun but while Disney was a one time thing for us, I could see us going back here again.
Hands down everyone’s favorite ride. (Although I also loved the Ariel ride I made the boys go on 😂). Picked up two swords and a spyglass to add to their dress up collections.
Magic kingdom. Real talk. Charlie got sick and didn’t sleep the night before so the day had a bit of a rocky start. Also it was freezing! But thankfully Charlie eventually perked up and we all ended up having a good day. I think my fave part of the entire day was the fireworks show at the end. That was literally a magical experience.
A little mini golf and swimming this morning before we head on our way home. This is the kind of Florida weather we were hoping to experience.