Ok, so I may be overusing this safari raglan pattern but it’s just such a quick and easy sewing project that I can’t resist! I’ve been in the middle of a sewing slump- mainly because I have some projects I HAVE to get done for my sister’s upcoming wedding and have been putting them off… Yeah I’m so bad about finishing those kind of things. It’s the welt pockets, y’all. Gotta make a pair of welt pocket shorts and I’m just not feeling the love right now!

This past weekend, I wanted to push through the slump by sewing some thing completely for fun. I got this Lizzy House dinosaur knit from Rachael a few months ago- I think I bought the very last bit that she had in stock! I knew the boys would love this fabric but hadn’t decided exactly what to do with it yet.

A raglan tee seemed like the perfect way to show off this print. I paired the dinos with some laguna jersey in navy. (you know me and my laguna love. 😉 ) Like I mentioned, I used the safari raglan by titchy threads. I used the same mods as I did for the swamp rabbit raglans I made for the boys this winter- sewing up the size 2 but moving the center fold over 1/8″ to add a little width and adding 1/2″ in length to the bottom. One of these days, I’ll just go ahead and trace out the 3 and stop being lazy!

I wanted these to be short sleeved and I didn’t have the short sleeve option for the pattern printed out, so I just eyed it and chopped the sleeve off around where I thought it should be. They turned out more elbow length than short sleeve, but I kinda love the elbow length so I think I’m going to leave them as-is. 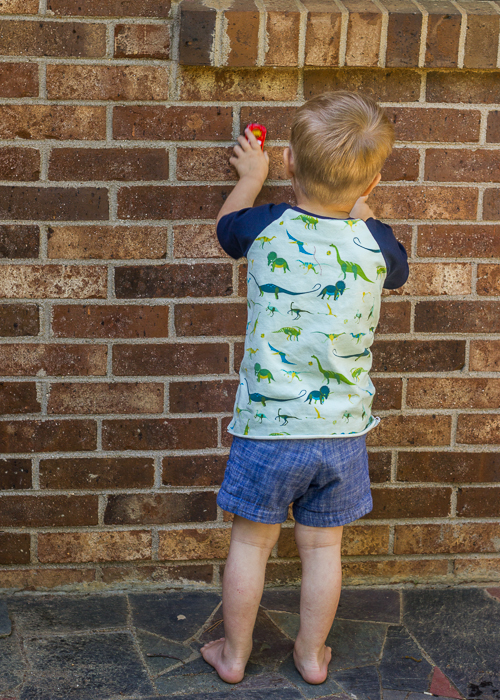 I had planned to hem the sleeves and bottom hem but decided I was too lazy and just left them to roll up. They look so cute all rolled up naturally so I’m calling it a  design feature.

Oh and those shorts are some I made for Oliver waaayyy long time ago. They’re a little short for Eliot now and I love seeing his little knobby toddler knees hanging out of them. No way am I letting that hem out and getting rid of that cuteness. 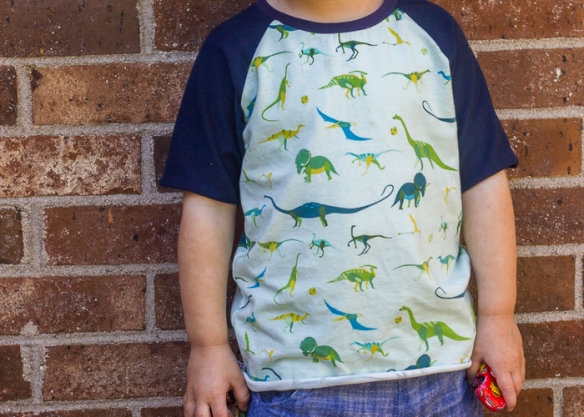 I did make a tee for Oliver too. I was going to make his a little different than Eliot’s but he liked Eliot’s so much that we just did an exact copy. Hey, he asked for it! Gotta encourage the matching while it lasts. 😉

Oliver didn’t end up in the pictures because he’s not feeling well today but here the IG picture from the other day so you can see his. FYI he requested to take the picture in front of the quilt ladder because “it would look all colorful.” Love getting his input now. It’s so cute.