So I was pretty excited to get the chance to sew along with Sew Geeky this month (started by Ari and Kat) and knew I was going to have to do something Star Wars related. Oliver has watched the Lego Star Wars spoof and is a little obsessed at the moment- we have epic light saber fights in our house every night! For some reason Darth Vader is his favorite character so when I asked him who he wanted to be for Halloween, he repeatedly affirmed he wanted to be Vader.

So Vader it was. Thankfully his costume is actually fairly easy and fun. Let me give you the low down…

T-Shirt: Flashback Skinny Tee, size 4. Kaufman Laguna Jersey in onyx from Fabric.com. I did a lot of research online. (Did you know there’s this whole website- wookieepedia– lolz- for accurate Star Wars trivia?) and decided to freezer paper stencil the shirt. I stenciled his armor onto a basic black t-shirt because I want his costume to be wearable the rest of the year, not just for one night. My stencil ended up bleeding a bit because I layered on the paint pretty thick so it would show up on the black shirt. Still, I think it ended up looking pretty good!

Pants: Parsley Pants, size 3. I cut off the flare from the knee down to make the pants more of a skinny fit. In reality, Lord Vader would be in leggings/tights but I knew Oliver would actually get more wear out of a cotton pant, so I used Kona cotton in Black for the pants fabric. I did a narrow hem because they were almost too short! 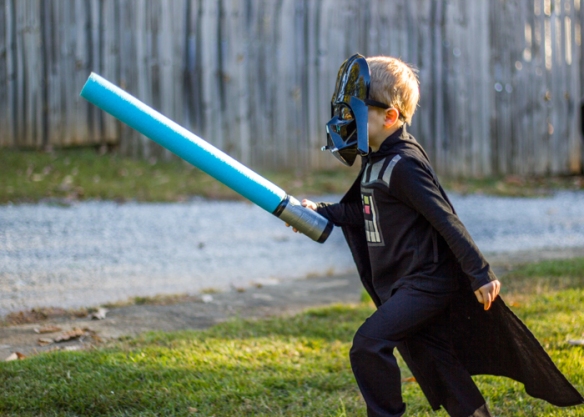 Cape: Totally winged this part of the outfit. Used the same black Kona as the pants. Oliver has a Batman jacket with a little cape  attached that measures like 8×12″ so I used that as a base idea. I measured how much further I wanted it to reach across his shoulders and then how much longer I wanted it to be….I just kinda guesttimated at how wide it should be at the bottom and cut a gradual angle from the top to the bottom. 1/4″ double folded hem on all 4 sides. Made some bias tape straps and sewed them onto the top of the cape sides and done! And fits perfectly! Phew.

Helmet is from Amazon (affiliate link)…the one store-bought part of his outfit. Did not have the gumption to try to make that!

Eliot is going as Yoda, and I have to admit to cheating a bit on his outfit. Some good friends gave us this yoda robe and hat and I didn’t see a point to making something that we already had! Plus the robe is a nice fleece, not the polyester yuck that’s sold at the stores so Eliot loves to wear it! It’s so soft. His pants are handmade so he’s at least partially in mama-mades. Pants are some quick change trousers- from AMH’s book Handmade Beginnings (affiliate link) in brown kona. Hand me downs from his brother and getting a second life as yoda pants! 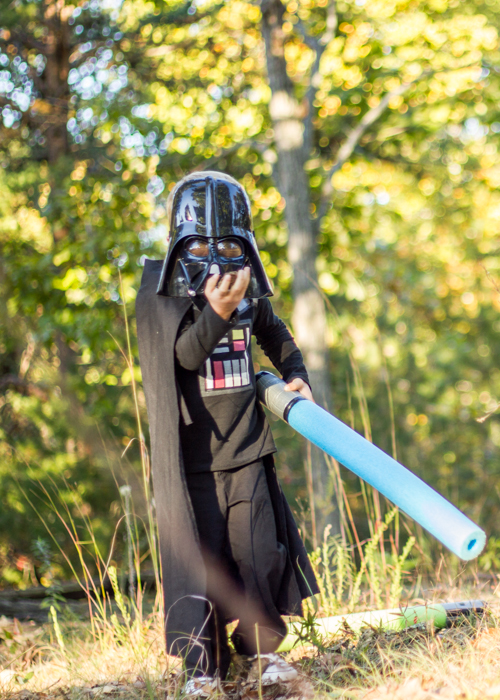 The boys had such fun in their photoshoot. They love to play lightsaber fights. FYI the lightsabers are made from pool noodles. Cheapest and most-loved toys ever. Also they don’t hurt so the boys can play rough and no one ends up crying! And I am well aware that Vader’s lightsaber is supposed  to be red but Oliver has declared this blue one to be his and no one can argue differently. Ah well, little details, right? 🙂 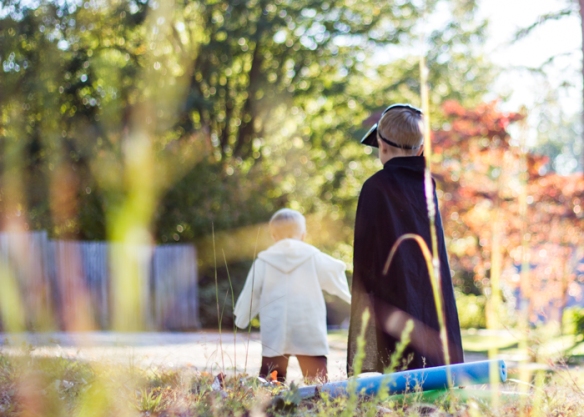 I’ll leave you with a few more from our fight scene… Can we say photo overload? But my favorite one? The hug at the end. Like I told Oliver, Darth Vader does end as a good guy so it’s totally appropriate for him and Yoda to end things with a hug. 🙂 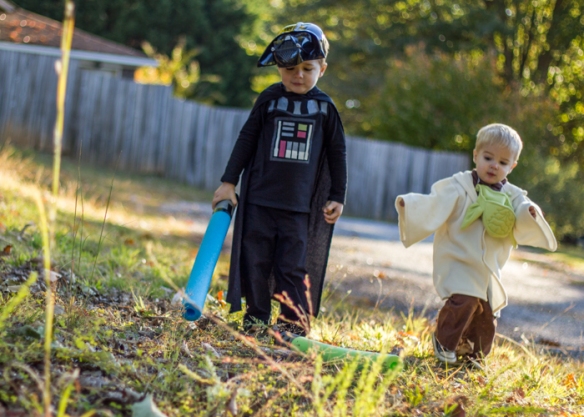