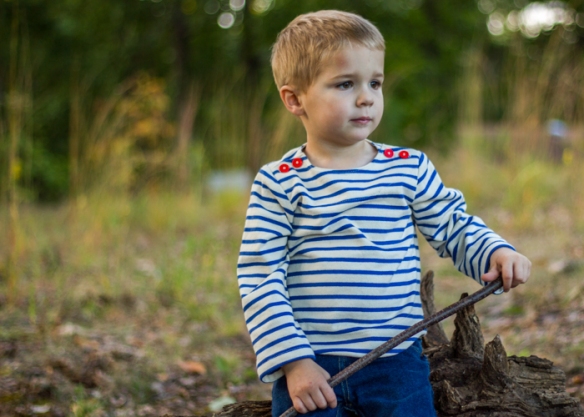 You know those days where you have to-do lists a mile long, but you just wanna blow them off and do something completely different? That was me earlier this week. I’ve had this Oliver+S sailboat pattern for oh, about 2 years and I have just never gotten around to making it. I just realized that my copy only goes up to a size 3T and Oliver is wearing 3T, occasionally 4, so he’s about to size out of this pattern.

This was no where on my list, but I just decided to have some fun and go for it. After all, I couldn’t let him size out of a pattern before I’d even made him something from it, could I? I pulled out this great heavyweight striped knit that I got at Mill End in Portland (why, oh why did I not buy more knits while I was in fabric mecca?) and got to work.

This top was seriously so quick to whip up! The reason I’d been putting it off so long is that I was afraid it would be long and complicated, and I just didn’t have time to put into it. Yeah, it was so much faster than I’d anticipated and very straightforward. It really only took me a couple of hours from start to finish- including tracing the pattern and cutting out the fabric. I love that this knit is a heavier weight so it feel more like a sweater- which is what Oliver needs more of for this fall. I also love the swingy shape of the top and the contrast buttons. I started out using an orange contrast thread for the facings but didn’t like the look it gave the top so I ripped it out and used an off-white instead. This way the orange buttons really pop.

My only complaint is that it’s just a wee bit too short so it won’t be too long before he grows out of it. It shouldn’t be too big of a deal this winter though because he will probably be layering another shirt underneath this one. However, If I make him another one, I will add a few inches to the bottom hem to make the top last a little longer. 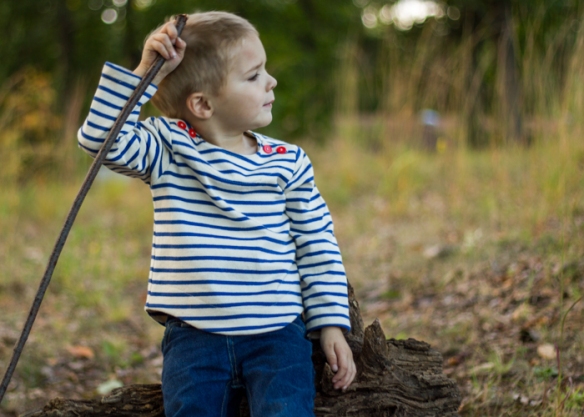 Every time I use an Oliver+S pattern, I fall in love with them a little bit more. The instructions are just so well written and you end up with such a professional finish. Bonus part is this was a paper pattern so a nice break from all the printing and taping I’ve been doing for pdf patterns recently!

I have another yard of this same knit in a coordinating color way- with blue being the main stripe and off-white the smaller one and am debating on making Eliot a sailboat top from that. Too match-matchy? Hmmm…Feel free to weigh in your opinion in the comments! I don’t dress them alike too often but they get a kick out of it right now so it’s fun to do it every now and then…

FYI his jeans are the small fry skinnies I made him for vintage may. I think they are one of the most-worn items of clothing I have made him and he gets compliments on them all the time. Definitely worth the time I put into them!