Have you heard of Project Run and Play? I had not heard of it until last season when (I think it was) Dana mentioned she was a judge for it. Love the spin-off of Project Runway! Go here if you need more info on it.

I wanted to participate in the home sewalong challenges this season because I knew it would push me to come up with new ideas. Last week’s challenge was to remix a bias cut skirt, and I just couldn’t figure out how to do that in a boy fashion so I sat out that week. This week’s challenge is to pick a fashion icon and make a look that represents him/her. I was drawing a blank until good ol’ Google popped up with a list of top male fashion icons and had David Beckham on the list. I knew Oliver would look super snazzy in a Beckham outfit, and I also knew I had the ability to make this outfit. 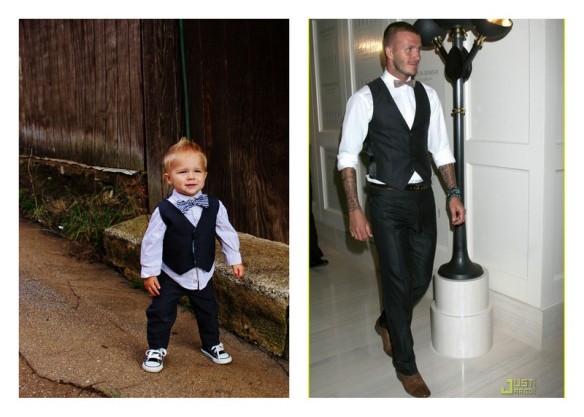 Here’s what I made him- bow tie (using this tutorial), vest (remixing my former pattern a bit), and skinny cut dress pants (self-drafted pattern). Pants and vest are made from an old pair of men’s dress pants. I used every last scrap of the pants to fit in both of them! FYI super cheap way to make toddler clothing! 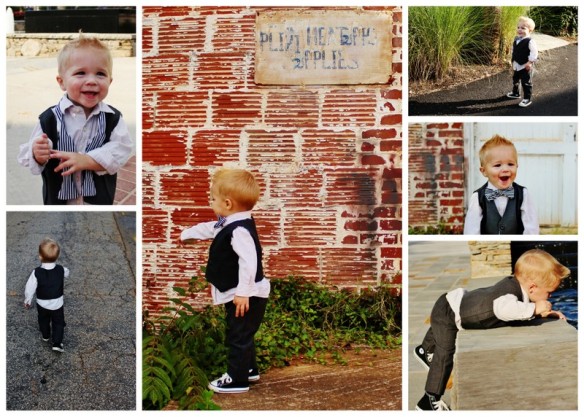 The end result is pretty close to what I had envisioned. I really wanted to make his button-down shirt also but ran out of time. I could not be happier with our photo shoot today though! Little Man was the perfect model and had so much fun running around downtown. He got quite a few admiring looks as well. 🙂 I know I’m biased, but seriously, how cute is he?! 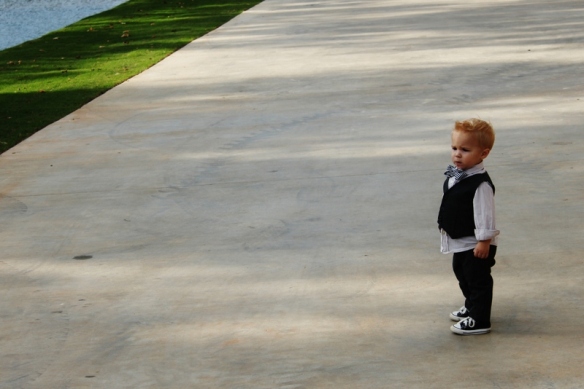 The vest- I cut in the shoulders and made a more dramatic V in front than I had previously. I did not top-stitch because I thought it would take away from the dressy look of the vest. I also added pockets to match the picture. The only problem with a toddler model is that my fitting times are so few and a bit rushed so I didn’t really get a good feel for the fit until we went for the photo shoot. I realized then that the back is a bit wide so the top falls down over his shoulders a bit as he runs around. I am going to take in the back a little at the center seam to fix that problem. 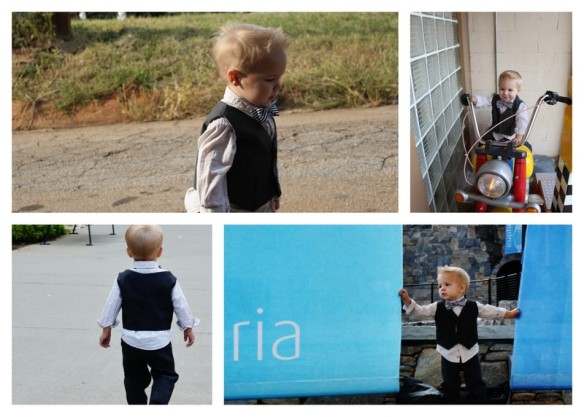 The pants- I learned a lot making my own self-drafted pattern for the first time. I used a pair of Oliver’s pants and narrowed the legs to make a skinny leg shape. I am so drawn to the skinny cut look that is in for boys now- not the “I’m wearing my little sister’s pants look,” but just a nice straight cut that narrows in at the bottom. If these pants turned out, I wanted to use the pattern to make him some skinny colored pants/cords like these ones from Old Navy. I am hoping to make a trip out to JoAnn’s this weekend or next to pick up some fabric for them now that I like the pattern. (Boo that it’s 45 minutes away!) The pants are a flat front and an elastic back. I used the instructions from the Treasure Pocket Pants to help me make the faux fly. Next time I will raise the back and lower the front a little more because they are a bit low-riding in the back= those cloth diapers give him such a big booty. 🙂 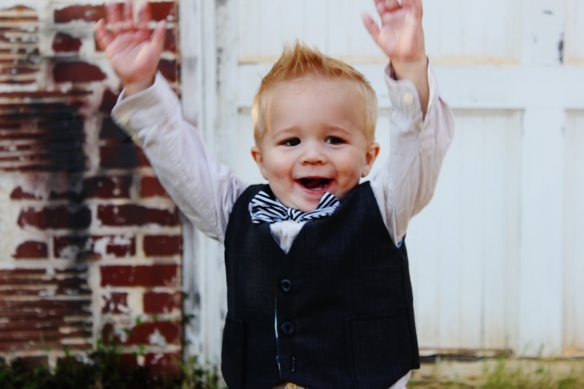 Bowtie- super easy and great instructions on tying! I love how it looks and I see quite a few more in his future. 🙂 Also don’t you just love the little extra touch his Chucks give to his look? I picked those up before he was born because his daddy loves to wear Chuck high-tops, and I knew he would be thrilled to have his son wear some also. So pumped they fit him for this fall! 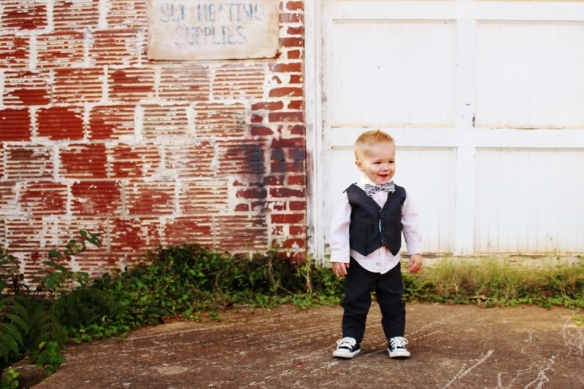 Make sure you head over to the PRP blog tomorrow to vote for the contestants! Also check out the Flickr group to see all the other cool looks at-home sewalong people have come up with for this week’s challenge! Looking forward to the next several weeks and seeing how I can stretch my creative sewing skills! 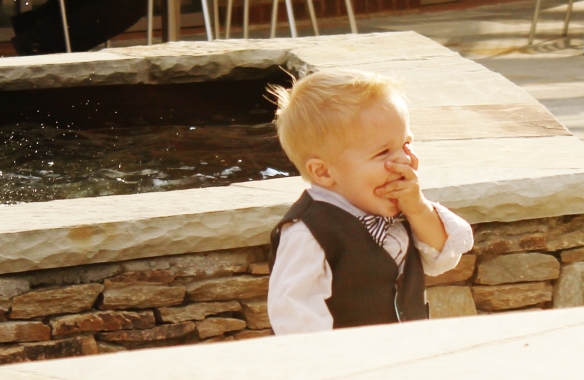